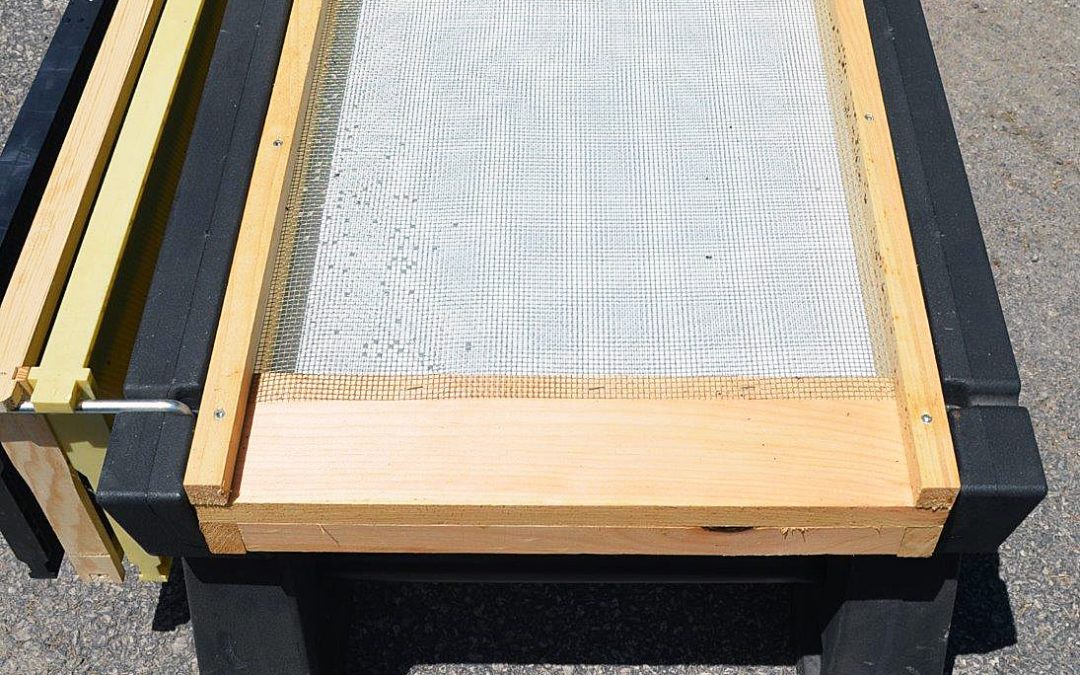 Honey Bee loss, looks like a lot again this year, we have had several beekeepers bring in equipment for us to look at, and help with necropsy of a dead out. This is routine now, and all the dead outs so far have a common denominator with all the telltale signs of Varroa. It is the exception that other indicators are present; Nosema and at least one queen failure would be some examples. There are about 30,000 colonies of bees in Ohio and 21,202 were inspected last year. Out of the 21,202 inspected 7,053 were found to have Varroa or one third of the total. Every year we lose about 40 to 50 percent of the bees in Ohio most of these loses can be traced to Varroa either directly or indirectly and I think these percentages have a direct correlation to the number of losses suffered across the country. There are several protocols for Varroa detection, ether, sugar roll, screen bottom board natural counts, limited 24 hour treatment and more. Over the years the number of mites counted that constitutes an unacceptable or acceptable level have been all over the board. All of the acceptable and unacceptable levels of mites in my opinion are unacceptable and a new zero tolerance of mites needs to replace all of the above. The number of beekeepers who wait until fall, honey is off, nectar flow is over, mite counts are right, is mind boggling to me and also reflect the number of losses, these are the people who loose bees. But I don’t really blame the beekeeper, and here is the reason why. The biggest problem in beekeeping in the history of beekeeping and especially for the last 30 plus years, and there is still no clear concise answer or direction for beekeepers as what to do? No clear voice of reason, it’s like everyone does their own thing, and waits to see what happens. Proof that that is unwise, is the sheer number of losses every year. How can we justify 10,000 colony loses every year in Ohio and no one entity or group is at least looking at the body count!

So with that being said let me once again add my voice to the masses. There are a number of possibilities for losses this time of year, starvation, weather, Nosema, Varroa, poor queens, these are some of the reasons listed in an article written by Jamie Ellis in this month’s ABJ. The milder the winter the better for the bees, the last two winters have been (ideal) for beekeeping, so discount weather for the last two years losses. Starvation can be problematic when honey production is dismal and winters are harsh. We can discount last summer as a poor honey production season as it was certainly among one of the best honey production seasons in the last 30 years. Drought seasons always produce record amounts of honey, the 88 drought would be a prime example. So discount starvation as a reason for losses the last two years unless the beekeeper got greedy. Nosema does not kill bees out right but gradually, and the fecal matter is evidence enough of the cause. A poor queen is always a concern and again the evidence is ever present to the experienced beekeeper, poor brood pattern, no brood, drone brood in worker sized cells, worker sized drones, and more. Beekeepers are taught to assess external causes of colony failure as opposed to what “I may have done,” or how “I may have prevented this,” or how “I can do this better,” “different” etc. I was able to trace one beekeepers loss all the way back to a midseason swarm, but just a casual glance would indicate a poor queen.

This leaves the nemesis Varroa as the major contributor to colony losses, but again the evidence is all there, Varroa just doesn’t suddenly appear and vanish. The evidence is in the cell, on the bottom board, bee, noticeable virus sign etc. Please keep in mind this is a simplistic view of all of the above, for space and convenience sake, each of these topics should be addressed individually in length at another time.

The beekeeper that had Varroa and treated late in the season does not have bees now. What is never taken into consideration is the fact that the viruses and pathogens caused by the mite kills the bees over time, long after the mites are dead and as a result the beekeeper does not associate the death with Varroa because after all, he did treat. Treatment does not end all, recovery takes time and if not planned properly the stresses of Varroa run into the stress of winter and these are compounded with added pathogens and viruses related to Varroa. The bees cannot handle all of the above. Beekeepers that have not inspected their bees in 2017 are already behind the eight ball. Oxalic acid should already have been applied; and this is the ideal time to do so. Please keep in mind that we lose more colonies this time of year than all other seasons combined.

What I mean by zero tolerance is simply this, when Varroa is detected a mite treatment is applied and the safest and most economical method of treatment on this level is Oxalic acid. The drip method can be applied if a vaporizer is not available or not economical.

What needs to happen is that experienced beekeepers need to adapt to a new mind set and stop doing the same thing over and over again expecting different results. If doing Varroa counts and the corresponding treatments work fine, someone then needs to explain the same consistent losses year after year with little or no improvements. Zero tolerance needs to be the new accepted practice and taught to all new beekeepers.

Bottom line, if you have a dead out and there are (((ANY))) Varroa on the bottom board, I’ll leave it to you to figure out why it’s dead and in order to be of further help you can rule out weather, starvation, Nosema, CCD, insecticide.

Hope this helps, but to get better results try doing things a bit different.

I have written very similar articles in the last few years every year, I think I will save this one on desk top and just reprint it again next year because I really don’t think things will change much, especially if practices stay the same.