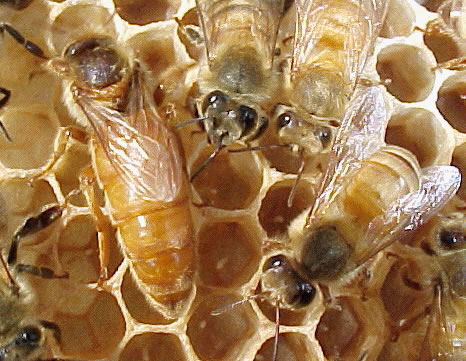 Well, thankfully, Queen Bee season is over. I think we mark about 2,000 queens a year, or at least it seems that way. I know we sell several thousand queens every year and as exciting as it is to hold the first one in your hand every spring, to receive some cosmetic touch-ups, it is just as exciting to send the last one on her way at the end of the season.

As always we try to sell a good mix from various suppliers Olivarez, Strachan, C.F. Koehnen, Wooten, Greg Zitlaw and there are none better than the above. We personally installed approximately 100 queens here and only had one that did not take.

Now, for the reason for the writing of this article:

“Supposed Queen Failures” First, let me state the obvious, if the brood nest is full of brood – you will not see any eggs! If the brood nest is full of honey – you will not see any eggs! You (will) see a spotty brood pattern – if brood nest is scattered with honey! If your bees swarm a complete stoppage of brood production will occur for about 20 to 30 days! If your colony population is low, you can only expect a small brood pattern, and as long as that pattern is tight and proportional to the volume of bees present – the queen is not at fault! No queen can out produce or overcome poor beekeeping! You cannot start a colony of bees with just a queen, do not laugh this is a common assumption! If you have lots of drones or drone brood being produced you may still have a perfectly viable queen. Let me explain, if you have lots of old, damaged foundation that has been drawn out in drone sized cells, or drone comb period, what else is a good queen to do!

I ran across an article in Bee Culture, Oct. 2016 issue recently written by Ed Colby, I thought interesting; here it is in part.

“A respected beekeeper reported that when you see spotty brood, or your colonies just won’t build up, or you see a rash of queen die-offs and supercedures, the unicellular fungal parasite Nosema Ceranae might be the culprit. He said you can knock out this disease with Fumagillin –B”…I’ve got some hives that fit this description, and in a majority, the mid-Summer application of this strong dose of Fumagillin turned them right around.”…So spotty brood doesn’t necessarily mean you have a bad queen! If your culprit is Nosema, you could spend a lot of money replacing perfectly good queens, with yet more perfectly good queens and still not see your colonies bounce back.”

This strong dose referred to above is a two gram bottle of Fumagillin into 1.5 gallons of one to one sugar water mix, using the dribble method of six ounces over the top bars two times per colony, eight days apart.

A number of beekeepers opt for the latter part of the above plan, as I have stated in previous articles, throw some money at it and see what happens, this is never a good plan, but this is all part of an on-going education!

I have a question for you…If your queen had a choice would she, replace the beekeeper?

Just maybe she is not the problem!