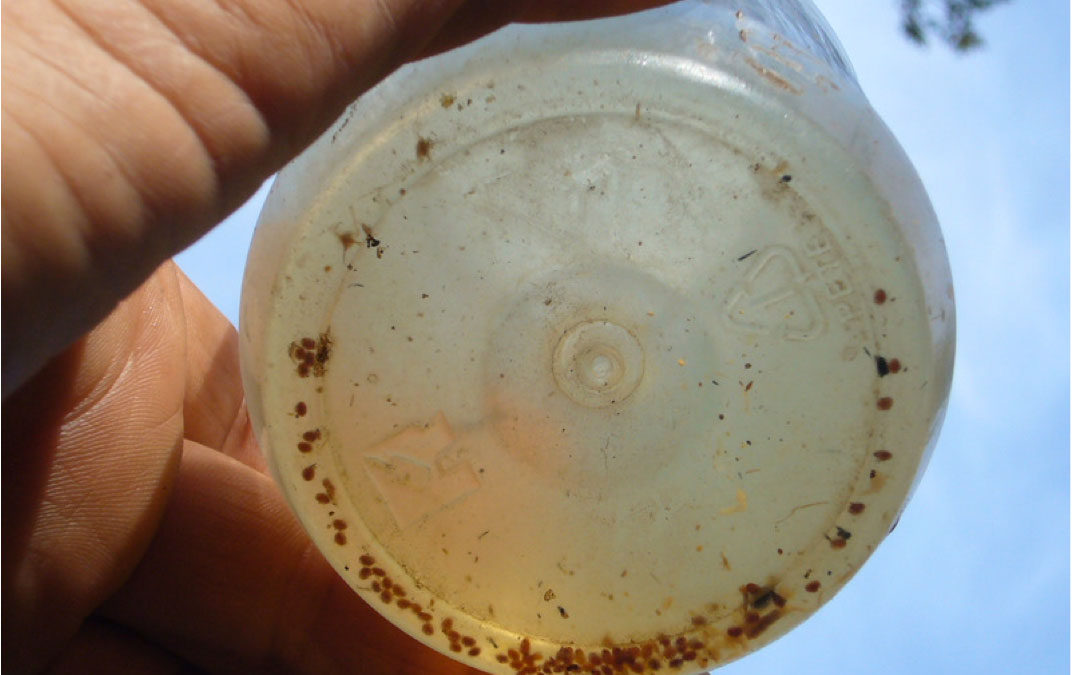 How many mites does it take to cause a virus?

A virus is a nucleic acid molecule and attaches to a host cell and replicates thousands, if not millions of times, so it takes one Varroa mite to cause a pathogen or virus!

Is a virus contagious?

All viruses are contagious by nature but some are specific and affect certain or specific hosts, not all living cells are compatible with all viruses.

How is 1 or 2 percent mite counts acceptable if 1 mite can cause a contagious virus?

It is not acceptable but it is taught everywhere that it is, and that in part is the reason we have such colony loses every year.
In a colony of 50,000 bees, 1 or 2 percent mite counts equal 152.1 to 305 total mites, anyone of which, or all can cause a contagious honey bee disease.

How many viruses do Varroa mites cause?

Pathogens are readily transmitted from bee to bee during the feeding process or fecal clean-up of diseased bees.

The basis for this article is to try to convince the reader it is by far better to be proactive in our war on Varroa than to take the – wait and see approach – of doing mite counts, which is tantamount to a death watch. You (will) do one of three things about Varroa: Quit, buy bees, or treat – your choice.

It is what we know, after we know it is all, that really counts.

The above article was written several years ago and I stand by every word, consider the following as an update or an addendum.

Generally speaking, and that is the only way an article or conversation can take place when it comes to counting Varroa, any method of detection or counting Varroa is really a hit and miss approach. I call it an exercise in foolishness; for example, you can use the common alcohol wash method, two different times several minutes apart on the same colony and get two different percentages, one requiring a treatment the other not.

A 2% mite count is (generally) considered an acceptable number of Varroa, to have in a hive and no action is required by the beekeeper. At no time does any mite count method ever take into consideration the mites under the capping or in the cells which is where the greatest numbers of Varroa are found by far. How do we know this? Because at no time is there ever a discussion about any percentages other than the ones in the jar. It is generally considered that two thirds of all Varroa populations are under the cappings at any given time and these two-thirds figures are never apart of the acceptable equation.

We can begin to understand why such great losses are experienced by beekeepers each and every year, when all it takes is one mite to cause a virus or pathogen in a colony of bees. These new figures also provide for greater mite loads at a much quicker build-up than anticipated. So these mites then in turn double to triple in population every 21 to 24 days to 900 to 2745 in just the first three to four weeks if left untreated.

In the meantime, the honey bees languish while viruses already start to spread throughout the colony, while waiting on a beekeeper to find 9 mites in a jar! I might add at this point, we can kill mites but does anyone know the recommended treatment for the 20 or more different viruses or pathogens caused by an unchecked Varroa? I’m still waiting for anyone to tell me the answer to this question.
To tell a new beekeeper to do a mite check is the pinnacle of stupidity in beekeeping; keep it simple stupid, (KISS). I know this bluntness will bother some beekeepers – GOOD! Because it is intended to! EXAMPLE: From the experts: Take 300 bees from the brood nest from several different locations/frames and place bees in a jar, spray with alcohol. New Beekeeper: What does the queen look like? If this needs an explanation, no explanation will suffice – if not, you may well be on your way to having living colonies this spring.

American Bee Journal (ABJ) just came out March 2020 and beekeepers interested in mite counts should read the article by Randy Oliver, Re-evaluating Varroa Monitoring. It is in favor of counting mites to determine treatment; however, it indeed makes a few interesting points that need to be taken into consideration, and still does not consider mite loads under the cap. “All of the above methods are only as good as how well you perform them.” (ABJ) “And can we minimize the chance of inadvertently killing the queen,” and it poses almost as many questions as it answers!

This brings me back to my initial argument and that is to question the reliability of such tests and should we encourage any new beekeeper to undergo such a task especially if individuals doing such tests, and doing so several thousand times a year, still have questions as to its validity – the answer is a resounding – NO! What an experienced beekeeper does is their business. It is, however, all of ours what we tell new beekeepers to do.
New beekeepers should be taught the most basic simple method of Varroa control possible, Oxalic dribble, and the following year vaporization, to do otherwise is irresponsible.